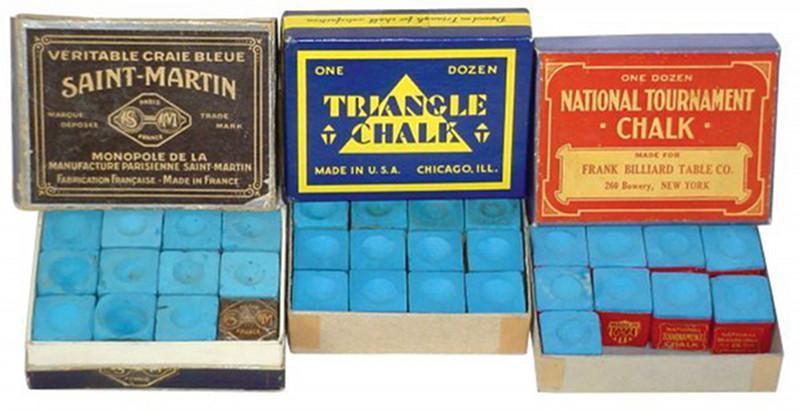 Historians agree that green was originally used because billiards descends from a long line of outdoor games involving sticks and balls. When these games were brought inside, green was chosen for table cloth to mimic the color of the outdoor playing surfacing--grass. It’s a very simple story, and one that’s apparently true.

Why blue is the preferred chalk color is a more complicated story, and one where myth and reality collide. If anyone ever asks about the color of chalk, tell them the story of Jack Carr, a marker (billiards scorer/referee) from Bath who made a fortune with an ingenius swindle. To tell Carr’s story, you must begin with some information about the evolution of the cue. The first cue sticks had flat wooden ends. Players seeking to better their games started experimenting with ways to prolong the contact between cue tip and ball. Some players fiddled with the end of a regular cue, using a file to rough up or round the flat tip. Other players discovered that a granular substance on the end of a cue provided added friction when striking a ball. Players would often twist the end of their cue on the plaster walls or ceiling of the billiard hall to add the necessary grit, as plaster then contained limestone, which easily disintegrates into a fine powder. Limestone is essentially calcium carbonate, which is commonly called chalk.

The bare wooden end of the cue, even chalked up in such a manner, hardly provided an acceptable hit, and players tinkered with adding leather or other softer materials to the end of the cue. In the early 1800s, a French army captain named François Mingaud perfected the modern leather tip. In the late 1820s or early 1830s, so the story goes, Carr improved upon Mingaud’s leather tip by chalking it. Soon, he was marketing his “magic twisting chalk,” which he sold in powder form in a small container, much like a snuff box or pill-box. With the magic twisting chalk and a couple of short lessons, the average player could turn a poke into a stroke and could impart remarkable spin on the cue ball by reliably striking it along the outer edge of the ball. In fact, Carr and other Englishmen became so good at imparting side spin on the cue ball, that side-spin became known as “english” in America.

Carr asked and received a high price—a half crown, or about the average weekly wage—for a box of his magic chalk. Business was brisk until one day a customer ran out of the magic chalk and substituted ordinary white chalk, which had all of the “magical” powers of Carr’s invention. The bottom of Carr’s business fell out. Side (or screw or follow) could be accomplished with any piece of calcium carbonate.

The key to Carr’s short-lived success in selling his magic chalk was packaging. His product was simply calcium carbonate, which is naturally white in color. But anyone can sell white chalk. Carr’s brilliance was twofold: calling it magic and... wait for it... coloring it blue. Chalk remains blue today because of Carr’s short con, at least that’s the legend, and the story to tell, even if it’s not true.

There was a Jack Carr, who was a billiards player. Whether he actually sold magic chalk is in doubt. The first written record of his magic twisting chalk is in 1858 but no mention of the chalk’s color is made, except to note that he used chalk ordinarily found in the billiard room, suggesting it was white. Carr’s story re-appeared in the 1880s and 1890s in magazines and books (again without mention of the color blue), but by the early 20th Century, the entire story was being questioned. Michael Shamos, in The New Illustrated Encyclopedia of Billiards, calls the story of Carr “apocryphal” since it does not appear in any work contemporaneous with his life.

Shamos indicates that blue chalk emerged in 1828 and green chalk in 1843, but gives no details as to where or why. It was quite clear that chalking the leather tip was well known by 1841. A Hand Book to the Game of Billiards calls chalking the cue tip “essential” but gives no details about the type or color of chalk. Phelan’s work of 1850 advises that chalk should be “entirely free from grit, dirt, and grease” but mentions nothing of its color. During these years, the dominant chalk color was white, owing to the simple manufacturing process. Large blocks of chalk were cut from solid, natural limestone deposits. The large blocks were then re-cut into smaller cubes and sold in their natural color—white. But white chalk was proving to be problematic. The cubes dried up, lost their form and easily crumbled. And white chalk itself was, well, too white: it marred the appearance of the green cloth after a few games and was difficult to clean. In 1884, Anthony Peple, a billiard player from Brooklyn, described the problem in his application for a patent for a Substitute for Billiard-Cue Chalk: “The chalk comes off the tip and discolors the cloth of the table and the cushions, and such cloth is unnecessarily worn by brushing the same in the efforts that are made to keep such cloth clean and free from the marks of the chalk.”

The messiness of white chalk explains the need to color chalk. Peple sought patent protection for his invention, a compound made by mixing a coloring agent with chalk (and perhaps some silica or magnesium). The coloring agent would be the “color of, or nearly, so of the billiard-cloth,...so that the cloth will not be marred in its appearance by the small particles that will eventually fall or rub off the balls upon such cloth; hence, the cloth will not require to be brushed so often, or so severely in cleaning the same, and it will not be worn out so rapidly.” For convenience, Peple compressed the mixture into blocks, which were then covered by paper on all sides but one “so that the fingers will not be soiled in the use of this cue-tip material.” In his application, Peple stated that he preferred to use chrome green as the coloring agent but also listed magnesia green and ultramarine green as other possible colors. Peple was awarded his patent on April 14, 1885.

The Brunswick-Balke-Collender Co. started marketing IXL green chalk in 1885 based on Peple’s patent. Click here to see the October 1908 Brunswick-Balke-Collender Co. catalog. There was resistance to the colored chalk, as players were used to white billiard chalk imported from Europe. At the same time, entrepreneurs and inventors were experimenting with various chalk substitutes. In the 1890s, a chalk-substitute became popular in Paris. This chalk substitute, which had remarkable properties for clinging to the cue tip, became known as French chalk, but was also called Italian chalk because it was mined in Sicily from porous volcanic rock deposits found near Mt. Etna. The volcanic rock was pulverized, mixed with a blue coloring agent and formed into blocks. Balkline players Jacob Schaefer Sr. and Frank Ives brought pieces back to America and raved about its capabilities. The Chicago Tribune concluded that it had improved their play by 15 percent.

In the early 1890s, William A. (“Billy”) Spinks, an American balkline player of note, brought a piece of the blue Italian chalk to a chemist, William Hoskins, for analysis. The Italian chalk contained large quantities of silica and corundum. After experimenting with various formulas designed to mimic the natural composition of the Italian chalk, they arrived at a chalk substitute consisting of 80 to 90% silica, a binding agent (glue), an abrasive compound (corundum), and a coloring agent. Their chalk-substitute was superior to natural chalk and to the Italian chalk.

Hoskins and Spinks were awarded Patent No. 578,514 on March 9, 1897. Hoskins and Spinks also noted in their application that their substitute chalk could be colored so “that no mark will be left upon the cloth as it falls from the cue-tip, but we prefer to give to the substitute a color which may render its presence on the cloth of the table to be readily observed, as it may thus be more readily removed.” Like Peple, Hoskins and Spinks also indicated a preference for chrome green as the color. They came to manufacture their chalk substitute in various shapes, a triangle, a cylinder and a cube, colored either chrome green, to compete with the Brunswick-Balke-Collender chalk, or ultramarine blue, to compete with the Italian blue chalk. It sold for 25¢ a piece, more than three times the price for white chalk.

Spinks chalk was a huge success. Click here to see the original William A. Spinks & Company catalog. In 1901, however, a federal court ruled that the Hoskins-Spinks patent was invalid. Competitors flooded the market with colored silica-based chalk, and the blue proved more popular among players and room owners. Over a century later, blue is still the most popular color.

Why is the cloth green, the chalk blue? Cloth is green because grass is green. Chalk is blue because, well, it was more popular than the green chalk. No, that simply will not do. Let me tell you the story of Jack Carr, a marker from Bath, and his magic twisting chalk. 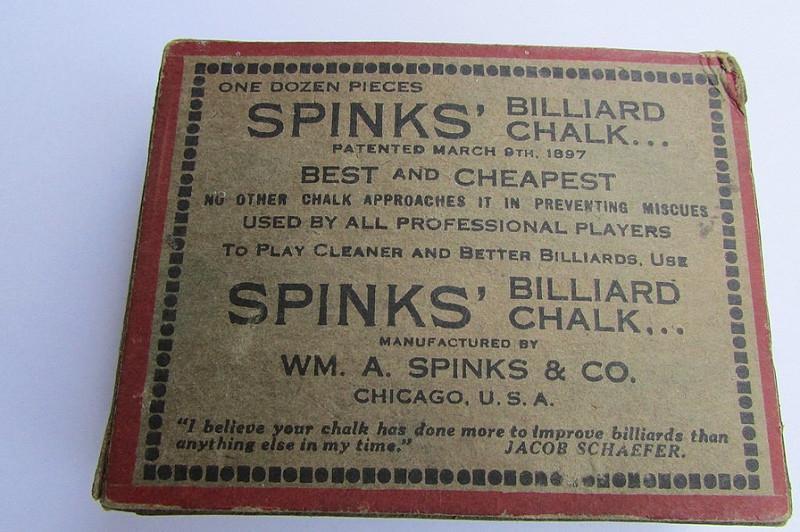 ABOUT THE AUTHOR: Andy Janquitto is a former USBA president, billiard player and frequent contributor to 3CushionBilliard.com. He remains deeply sorry for all the lucky shots he has ever scored. Writing, like 3-C, is one of his hobbies. He likes to play with words but usually loses. For another one of his writing efforts, visit www.oleoheir.com.