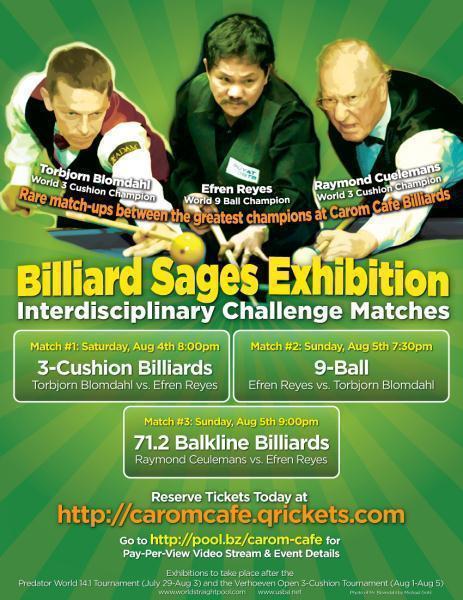 Cross-Over Billiard Players Through the Years

If you are a carom billiards player, you cherish a five-minute scene in the middle of the 1961 movie, The Hustler. Fast Eddie Felson’s manager, Bert Gordon, has set up a high stakes game at a Louisville mansion owned by Findley. Anxious to start the match, Fast Eddie removes the table cover and is confused by the absence of pockets. “Thought we came here to play pool?” Felson says. "I don’t play pool, Mr. Felson,” Findley says. He sips from his drink, a cigarette wedged between his middle and ring fingers. “I play billiards. My house, my game. You don’t have to play if you don’t want to.”

After some hesitation, a game for $100 is arranged, but not before Bert asks Eddie whether he’s ever played billiards before. “Sure,” says Eddie, obviously lying. After playing even for several games, Eddie wants to raise the bet. “Level with me, Eddie,” Bert says. “You ever play billiards before?” Eddie responds, “What's the difference? You got a pool cue, balls on the table. All you gotta do is get the feel of it.”

For fictional players, moving from the pocket game to the carom game is seamless. Fast Eddie eventually busted Findley, taking a cool $12,000 off the southern gentleman. In real life, fewer and fewer players play both disciplines. Cueists more often play one exclusively. It was not always this way.

Over 100 years ago, recreational players dabbled in both styles, which were equally popular. On the professional level, players competed for, and won, world and national titles in both disciplines. Admittedly, the two games were in their nascent stages, and many of the top carom players did not play three cushion, viewing it as inferior to the balkline game. The concept of a “world champion” was also more flexible, given the lack of a universally recognized governing body. Still, Alfredo De Oro’s accomplishments shine. In 1887, he won the pocket billiards world championship in 61 up (the prevailing game at the time). Back then, the world title holder had to defend the championship in challenge matches, which were more prevalent than tournament play. Over the next 30 years, De Oro would win and lose, and win back, the title in 61 up, continuous and 14.1 over a dozen times. One source was 16 times, another says 32 times. No matter, De Oro was a multiple-time world champion in pocket billiards. Not to be outdone, he held the world three-cushion title 10 times between 1908 and 1919. Other cross-over world title holders in both styles in the early 20th century were Thomas Hueston and John Horan. 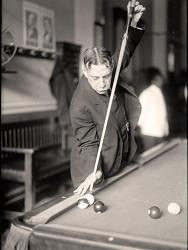 Willie Hoppe is well-known as a carom billiard player, first in balkline and later in three-cushion. He won 51 world championships in the pocketless game, but he actually got his start playing pool. Willie and his older brother, Frank, were child prodigies in pocket billiards, touring when they were 7 and 9 years old, respectively. Willie was diverted to the carom game by Maurice Daly, who said that Willie’s stroke was better suited for balkline. After converting his father’s pool table to a carom table, Willie focused on caroms, but not exclusively. In 1914, he played a series of mixed-style matches against Melbourne Inman, the world champion in English Billiards, a three-ball game played on a snooker table where players can score by caroms or by pocketing balls. Hoppe won 4 of the 5 blocks, largely because he was slightly better at English billiards than Inman was at 18.2 balkline.

Throughout the 1920s and 1930s, players moved between the two disciplines, sometimes chasing the money offered by the other style. Most notably, Johnny Layton was a 13 time world champion in 3-cushion and a 2 time world champion in 14.1. There was also a push for cross-style exhibitions to draw spectator interest. Ralph Greenleaf engaged in three cushion exhibitions against the luminaries of the carom game, including De Oro, Layton, and former world champions George Moore and Bob Cannefax. Greenleaf impressed the writers with his ability, and he was competitive but ultimately fell short in the multiple game matches by such scores as 300 to 264 and 300 to 254. In 1926, Greenleaf and Hoppe battled twice. Greenleaf lost 600 to 362 in 561 innings and 600 to 527 in 656 innings, averaging .645 in the first and .803 in the second.

Three years later, Hoppe turned the tables on Greenleaf. After learning that he would be barred from the world championship tournament in 18.2 balkline, Hoppe turned to pocket billiards, playing Greenleaf in a block of 12 games of straight pool in January 1929. The games were handicapped. Greenleaf had to reach 125, Hoppe 100. Greenleaf won 11 of 12 games, 1500 to 591. Greenleaf’s high run was 108. Hoppe could do no better than 34 on the 10 x 5 table. The next year, the two were to reprise the contest in a dual test, but Greenleaf withdrew because of illness and was replaced by Andrew Ponzi. Hoppe bested his rival in 3 cushion, 650 to 328, but was crushed 10 games to 1, 1323 to 650, in pool. 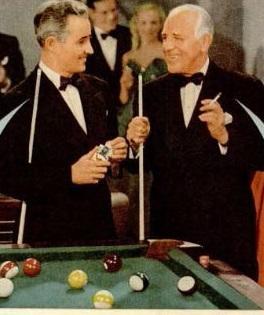 The 1940s saw the greatest cross-over of players from pool to three cushion. Irving Crane finished 14th with a .701 grand average at the 1941 world championship. The next year, Ponzi and Greenleaf played in the world championship. Greenleaf finished tied for 3rd with a .880 grand average. Two years later, he placed 6th with a grand average of 1.06. (Averages were inflated because the 1942 and 1944 tournaments were played with optional cue ball rules.) The world’s championship three-cushion tournament in 1947 featured 10 players in a round-robin format. Three of those players were world champs in pool: Crane, Ponzi and Willie Mosconi. A fourth pool player was Joe Procita, no slouch in either style. Hoppe won. Mosconi finished 4th with a .760 grand average, followed by Andrew Ponzi (.819) in 5th and Joe Procita in 6th (.806). Crane finished 10th with a respectable .729 grand average. He and Procita shared the high run award, each tallying 11. 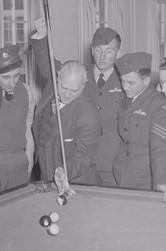 It was during the 1940s that pool eclipsed carom billiards as the most popular form in America. The end of carom billiards was clear during World War II. Hoppe toured armed forces bases, giving exhibitions and playing some of the troops. He found that the soldiers wanted him to play pool ninety percent of the time, and he readily obliged. As the decade closed out, an attempt was made to breathe life into the carom game. Hoppe and Mosconi engaged in a series of three-cushion matches. The first series was played in Chicago in November 1949 to 400 points in 8 blocks of 50. They played 2 blocks each day. Hoppe won 7 of 8 blocks. The eighth block was the best: Hoppe defeated Mosconi 50 to 35 in 21 innings. Overall, Hoppe won 400 to 278 in 342 innings. Averages were high, 1.17 to .813. The next November, the re-match occurred in Julian’s Fourteenth Street Academy in New York. Hoppe took 5 games and the match.

By the end of the 1950s, the popularity of both pool and pocket billiards had waned. The billiards industry received a jolt of energy with the release of The Hustler, but the focus was on the pocket game. When the movie appeared, Harold Worst was the reigning 3-cushion world champion (according to one governing body), having won the title in 1954 and defended it several times in challenge matches. But everyone wanted to be Fast Eddie Felson or Minnesota Fats, and there was a resurgence in pool. Realizing that money was to be made, Worst switched to the pocket game. Some say the first time he had ever played pool was in 1961. He quickly mastered the game and, by 1965, Worst was the best. In that year, he won the Johnston City 9-ball, 14.1 and All-Around Championship and the Stardust one-pocket and all-around championship. He died of cancer the following June, a couple of months shy of his 37th birthday.

Other cross-over stars in the 1960s and 1970s include Eddie Robin, a US National 3-Cushion player who has authored books on one pocket strategy and three-cushion position play, and Larry Johnson, better known as Boston Shorty, or just Shorty, a noted hustler in both styles. Writer Robert Bryne describes Steve Mizerak as an “excellent” three cushion player. Noted history Charlie Ursitti concurs, adding that Allen Hopkins and Jimmy Fusco are also adept at the carom game. The list is easily lengthened. According to Ursitti, all the great pool players played three-cushion.

In more contemporary times, a few professionals play both disciplines. Jeanette Lee has played in the US National Woman’s three-cushion Tournament and in the Sang Lee Open held at Carom Café in New York. Pool trick-shot artists Mike Massey and Tom Rossman play 3-cushion. Semih Sayginer can be seen playing 8-ball on You Tube. Efren Reyes, considered by many to be the best pool player ever, has said that balkline is his favorite game. He bested Raymond Ceulemans in an exhibition at 71.2 balkline four years ago at Carom Café, 100 to 95. And he averages around 1.00 in three cushion. On the carom side, Torbjorn Blomdahl plays pocket billiards at a high level. He and Reyes have played cross-over exhibitions. In 2007, Blomdahl defeated Reyes in 9 ball, 9 to 5, then defeated him in three cushion, 30 to 20 in 20 innings. In 2012, they participated in the Billiard Sages Exhibition. In 10-ball, Reyes took 8 of the 10 games. Blomdahl won at 3-cushion, running a 16. Some of these cross-over competitions are available on You Tube.

The dearth of cross-over professional players today is easy to explain. The skill levels of both styles in the professional level are so high that mastering one style is difficult: mastering two is nearly impossible, and chasing the prize money in another style is hardly economically sound. For the cross-over recreational player in America, the biggest obstacle is the lack of carom tables in public pool halls. The pocket game dominates. But, if you have the chance to try the other discipline, there is much to gain, little to lose, in the venture. Remember Fast Eddie’s view, “You got a pool cue, balls on the table. All you gotta do is get the feel of it.” 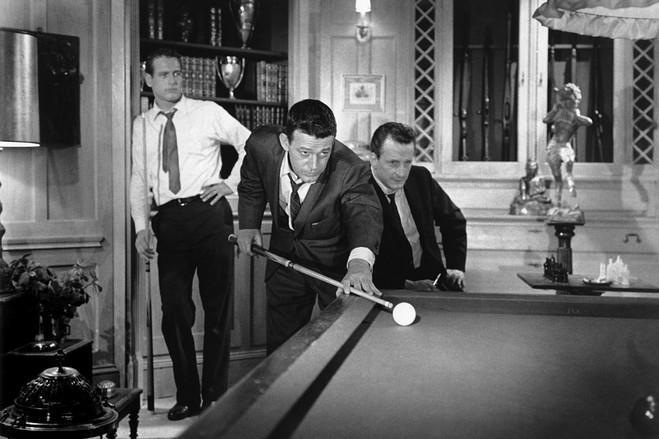 ABOUT THE AUTHOR: Andy Janquitto is a former USBA president, billiard player and frequent contributor to 3CushionBilliard.com. If you visit him you may play 3-cushion billiards on his home table. Writing, like 3-C, is one of his hobbies. He likes to play with words but usually loses. For another one of his writing efforts, visit www.oleoheir.com.