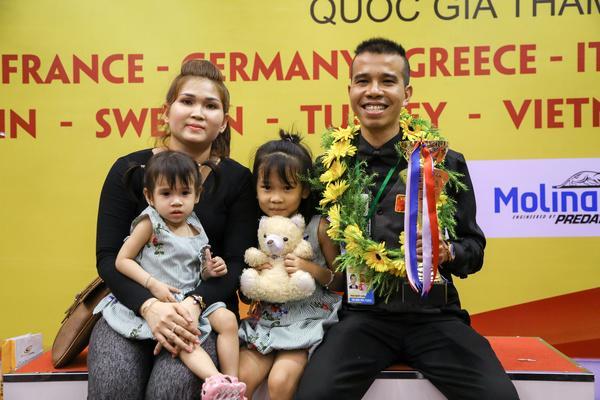 Tran Quyet Chien has found 2018 to be the perfect moment for reaching top form on the International 3-Cushion Billiard scene. Beginning in February when he won the Ho Chi Minh World Cup in front of thousands of adoring home town fans, to his most recent victory in the LG U+ Cup 3Cushion Masters, this talented young man proudly represents the future of 3-cushion billiards.

Thanks to our friends at Viet Nam News for posting this interview with Tran Quyet Chien which took place after his World Cup win and before the LG U+ Cup event.

Trần Quyết Chiến, 35, has become the first Vietnamese cueist to ever win the top prize at the Billiards World Cup after beating his countryman Ngô Đình Nại 40-39 in the final of the recent Three-Cushion Carom Billiards World Cup held in HCM City. Thanh Nga talks to him about his career

Inner Sanctum: The podium of new Vietnamese stars at the World Cup has captured the hearts of the billiard crowd as you became the first Vietnamese World Cup winner in history. How did you feel?

I didn’t know which words to say about my feeling at that time, but it was too wonderful and I was too happy. I performed a minor miracle on the closing day. I beat Frédéric Caudron of Belgium in the semi-final and had an incredible finish against my fellow countryman Ngô Đình Nại in the final.

The final, played in front of some 1,500 spectators, was a showpiece.

Inner Sanctum: When did you fall in love with billiards?

I was born in a poor family in the southern province of Cà Mau in 1983. My father is a civil servant and my mother is a trader. My mother placed a billiards table at home where people could play for a fee. Since then, my love for billiards and colourful balls was shaped from the time I was small. In a poor village, a billiards table was an entertainment centre for men. Seeing adults playing billiards, I learnt by imitation.

Inner Sanctum: When did you start playing billiards professionally?

I began to compete in the first national event in 2008 and then in professional events in 2010.

In fact, I always have “competitive” blood in any tournament. I want to compete in all events at home and abroad. However, in life, I am friendly and nice.

Inner Sanctum: Can you tell me the most memorable matches in your career? 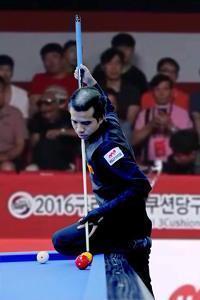 In the World Cup 2012 in Egypt, I faced world No 1 player at that time, Frédéric Caudron. I felt that I was too “small” compared to him and of course, I was beaten by him and I admired him very much. But after several years of gaining experience and honing my skills, I am now confident to take on the leading cueists in the world. And now I am very glad that I beat Caudron in the semi-final of the Three-Cushion Carom Billiards World Cup held in Việt Nam this year. I also beat Caudron in the World Cup in 2015 in Việt Nam and Marco Zanetti of Italy in the World Cup Luxor in 2014 in Egypt. I defeated Daniel Sanchez of Spain at the World Cup Istanbul in 2013. But for me, the most memorable match was with Torbjorn Blomdahl of Sweden in the World Cup Istanbul. Blomdahl took the lead of 29-5 but I didn’t give up, to notch an equalizer of 40-40 and then I lost to him 2-3 in the penalty.

Inner Sanctum: The final game with Nại in this year’s World Cup also impressed me very much. What was your secret to overcoming the world-leading players?

Despite what happens, I will fight and my spirit won’t yield. Before entering a match, I don’t care whoever my rival is.

Inner Sanctum: Can you describe your proudest achievements?

I finished third in the national championships in 2012 and 2014. After that I became the runner-up in the national championships in 2015-17 and took the title in 2018. I was the runner-up in the World Cup in South Korea in 2016 and won the World Cup this year. On August 18, I won the International Three-Cushion Carom Billiards Tournament BTV-Becamex IJC Cup 2018 held in the southern province of Bình Dương. I beat Kang Dong Koong of South Korea 12-8 in the final.

Inner Sanctum: Can you say something about playing billiards?

Billiards is an art and an intellectual sport. We should play it with our heart and with passion.

Inner Sanctum: Who is your idol?

Frédéric Caudron of Belgium. He is my teacher and my friend.

Inner Sanctum: How about your family? Can you describe them a little bit?

I am married and have two children: Trần Phạm Thiên Kim is 6, and Trần Phạm Thiên Ý is 2 years old. My wife is Phạm Thị Kim Thoa, 28, born in the southern province of Long An. Now we live in Bình Thạnh District in HCM City.

Inner Sanctum: What’s your next target?

[Editor]: And that is exactly what he did!